Did you know just one concussion can triple the long-term risk of suicide in otherwise healthy people. For people who already struggle with brain-based issues due to Hashimoto’s, concussions need to be taken very seriously. 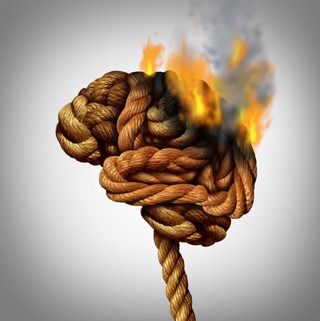 Although brain-injured football players have been receiving all the attention lately, the typical concussion patient is a middle-aged adult. Most concussions happen during traffic accidents, falls at home, and in other everyday situations.

A study looked at a quarter-million subjects who had been diagnosed with a mild concussion during the last 20 years. Researchers found suicide occurred at three times the norm in this population. They also found that on average suicide occurred nearly six years after the concussion. Also, the risk increased with additional concussions.

Why does a concussion increase suicide risk? Why does having Hashimoto’s increase risk?

People with unmanaged Hashimoto’s hypothyroidism are at increased risk for damage from concussions, as their brains may already be inflamed or compromised from their autoimmune thyroid condition. Sufficient thyroid hormone is vital to dampen brain inflammation.

Brain inflammation is tied to various brain-based disorders, including depression and mental illness. In fact, a 2014 study concluded that sustaining a head injury leads to a greater risk of mental illness later in life.

When patients fail to employ strategies to dampen brain inflammation, post-concussive inflammation continues its crawl through the brain like a slow-burning fire, consuming neurons in its path. This can go on for years after the concussion, impacting mood, memory, and general function.

What’s more, thanks to intimate communication between the brain and the gut, a concussion often impacts gut health and function. Many people report the onset of digestive issues after a concussion.

This is bad news because research shows an inflamed and unhealthy gut is directly linked to depression, giving post-concussive patients a double whammy of depression-inducing inflammation that travels back and forth between the gut and the brain.

For every person who dies from suicide, many others think about it or suffer from chronic depression. For the person with Hashimoto’s hypothyroidism, depression may already be a battle as poor thyroid function impacts brain function.

This study shows a clear need for better long-term care of patients with concussion.

Fortunately, functional medicine offers many strategies to reduce brain inflammation and lower the risk of mood disorders such as depression after a concussion. These strategies also help manage Hashimoto’s hypothyroidism:

If life hasn’t been the same since your concussion, contact my team to see how functional medicine strategies can help your brain and your Hashimoto’s hypothyroidism condition.