Hashimoto’s and gas, bloating, constipation, or diarrhea? Could be SIBO

Do you have Hashimoto’s as well as gas, bloating, diarrhea, constipation, IBS…or maybe all of the above? Then you may have SIBO, or small intestinal bacterial overgrowth. 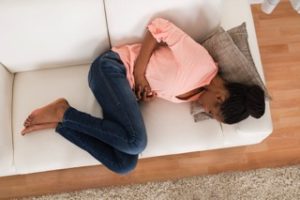 Doctors have long blamed stubborn gut problems on stress. For the person whose life is dictated by the cruel whims of their digestive system, this can feel like shame and blame. Thanks to new research, these days we know many things cause gut problems. They include food sensitivities (especially to gluten and dairy), leaky gut, gut inflammation, autoimmunity, poor brain function, and SIBO.

These are the same factors tied to Hashimoto’s hypothyroidism and managing them is important for both gut and thyroid health.

SIBO results from too much bacteria that belong in the large intestine migrating into the small intestine. When these bacteria consume sugars and carbohydrates, they produce large amounts of gas that causes not only bloating, belching, and flatulence, but also constipation or diarrhea (depending on the type of gas produced).

Many different lab tests, stringent dietary strategies (managing SIBO often requires a diet that restricts most everything but meats and a limited variety vegetables), and treatment protocols exist to treat SIBO, and sometimes it’s a matter of trial and error to land on an approach that works.

But if you don’t want a relapse, it’s important to ask why you have SIBO in the first place.

Brain function is one of the most overlooked and unaddressed causes of SIBO. The digestive system maintains close communication with the brain. Poor brain function leads to poor gut function (this explains why people often suffer from gut problems after a head injury). Digestive juices and hormones are not sufficiently released, motility slows so that food sits longer in the intestines, giving rise to bacterial overgrowth, and the valve between the small and large intestine does not stay shut, allowing bacteria from the colon to escape into the small intestine where it does not belong. All of these are examples of how poor brain function leads to SIBO.

People with unmanaged Hashimoto’s hypothyroidism are susceptible to accelerated brain degeneration and the digestive consequences of that, leading to SIBO. Low thyroid function itself also contributes to sluggish digestive function, which raises the risk for SIBO.

The elderly are especially vulnerable to malnutrition caused by SIBO, as are the increasing numbers of children born with autism and other brain development disorders. Fortunately, you can improve gut function through simple exercises that help tone the digestive system and prevent relapses of SIBO.

Managing SIBO does not have a one-size-fits-all solution, and there are various ways to approach it that include both nutraceutical and/or pharmaceutical approaches. Diet is always an important strategy. For more information about managing SIBO and Hashimoto’s hypothyroidism, contact my office.