Plenty of sunlight needed for sleep with Hashimoto’s

It’s now common knowledge that nighttime exposure to computer, tablet, and TV screens sabotages sleep —the light they emit simulates sunlight, thus suppressing sleep hormones. However, plenty of daytime sunlight is vital for good sleep. Most of us don’t get near enough. If you have Hashimoto’s hypothyroidism, daily natural light is one way to help manage your autoimmune thyroid condition. 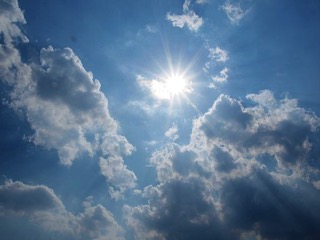 Research shows the average person spends less than an hour a day outside. For shift workers it’s even worse. Lack of exposure to sunlight inhibits production of melatonin, a hormone that puts us to sleep. Healthy levels of melatonin also help regulate inflammation and prevent autoimmune flares associated with Hashimoto’s hypothyroidism.

A Finnish rat study observed one group living under fluorescent lighting and another group exposed only to sunlight through windows every day. While both groups received the same duration of both light and darkness during the study, the rats exposed to sunlight produced significantly more melatonin.

It’s not that the artificial light was detrimental. It simply wasn’t strong enough — the sunlight was more than seven times brighter than the fluorescent light. This is what boosted melatonin production. Researchers assert variation of light throughout the day, from dawn to dusk, also supports healthy melatonin production.

During a sunny day, lux levels (which measure the intensity of light) reach 50,000. Compare this to indoor lighting, which ranges in the low to mid hundreds at the most. For most of human history we have lived with natural light and it plays a significant role in the function of the body and brain.

A healthy supply of daily sunlight affects so many systems in the body that it is a cheap and easy way to support your health while managing Hashimoto’s hypothyroidism.

Why melatonin and light rhythms are so important

Anyone who has suffered through insomnia and sleep deprivation understands the importance of sufficient and quality sleep.

However, melatonin and our sleep-wake cycle (also called circadian rhythm) are intertwined with every system in the body, affecting much more than how rested or tired we feel. Heaps of studies point to the importance of a healthy sleep-wake cycle for overall immune, hormonal, and mental health.

For instance, one study found that women suffering from PMS show chronically low melatonin levels. Just two hours a day of exposure to sunlight increased their melatonin levels and relieved their symptoms.

Another study showed subjects experienced a 160 percent increase in melatonin at night after just a half hour of exposure to bright light from a light box.

Melatonin has also been shown to play a significant role in immune system regulation. The healthier and more balanced your sleep-wake cycle and melatonin production is the easier it is for your immune system to fall into balance, thus taming Hashimoto’s hypothyroidism flares.

How to get enough outdoor light in an indoor world

It’s not easy getting enough sunlight when you’re indoors all day working or going to school. But it’s vital for healthy sleep, brain function, and metabolic function to get enough light exposure.

Some solutions are obvious — spend time outside as much as you can. Eat lunch outside and go for a walk on your breaks. Maybe you can even work outside on your laptop if your job is portable. If your Hashimoto’s hypothyroidism has you tired out, spend some time simply sitting or lying in natural light (but don’t get sunburned!).

If possible, work near windows that get plenty of natural light. One study showed employees working near a window received twice as much light as their coworkers who didn’t and hence enjoyed more sleep.

If sufficient exposure to natural light isn’t possible, indoor light therapy has been shown to help relieve sleep and mood imbalances. In addition to helping battle the wintertime blues, this may also help you better manage Hashimoto’s hypothyroidism.

Look for a light box that delivers plenty of lux and is big enough for sufficient exposure. The Center for Environmental Therapeutics provides criteria for purchasing a reliable light box, which they recommend using for at least a half hour in the morning.

Ask my office for more advice on managing Hashimoto’s hypothyroidism with functional medicine.