Have you ever had obvious low thyroid symptoms but your lab tests came back normal? Many such patients, the majority of them women, are told it’s simply stress, aging, or depression. The problem is most doctors use lab ranges on blood tests when functional ranges provide more clues that explain the symptoms of conditions such as Hashimoto’s hypothyroidism. 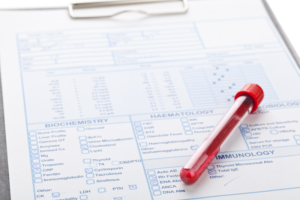 The lab ranges on a blood test look for diseases while functional medicine ranges look for patterns and markers that spot trends toward disease that can still be reversed or halted. For instance, the lab ranges for diabetes are quite high, but a functional range can let you know your blood sugar is in the danger zone well before you need pharmaceutical treatment and have caused considerable inflammatory damage to your body.

In another example, many people with clear and obvious symptoms of low thyroid function are told they are fine for years while autoimmune Hashimoto’s destruction of the thyroid gland continues unchecked and untreated, worsening symptoms all the while. Had it been identified early enough, the patient could take the necessary steps to slow or even halt its progression.

Functional blood ranges can help you stop the progression toward disease

Functional medicine addresses the underlying physiological mechanisms causing your symptoms. In conventional medicine, a condition must have progressed far enough to diagnose and treat with drugs or surgery, such as thyroid removal (which still doesn’t help many patients).

Additionally, lab ranges are determined by a bell-curve analysis of patients who had their blood drawn at that center, many of whom are likely quite sick. As the health of Americans continues to decline, so do the ranges for what qualifies as healthy. For some markers, we don’t know what qualifies as healthy, just average. Lab ranges for hypothyroidism are widely believed to be too broad and thus fail to identify many patients with hypothyroidism.

Functional ranges look for patterns in the markers

Functional medicine doesn’t just look at individual markers, but also for patterns among various different blood markers. All systems in the body are inter-related and a problem in one area of the body can show up as an out-of-range marker in another area.

This can help identify different types of anemia, whether your high blood sugar is raising your risk of heart disease, or whether a hormone imbalance might be affecting your thyroid.

Another example involves looking at markers to determine whether activated or depressed immunity is related to a virus, bacterial infection, allergies, or even parasites.

We can especially see this in testing for hypothyroidism. Standard tests only look at thyroid stimulating hormone (TSH) even though about 90 percent of cases of hypothyroidism are caused by an autoimmune disease called Hashimoto’s. This is because knowing whether a person has Hashimoto’s does not change the standard of care in conventional medicine.

However, a functional test will include markers to identify autoimmune Hashimoto’s hypothyroidism and other causes of low thyroid function. Knowing what is causing the thyroid to under function determines the best way to manage it and improve thyroid health.

A blood panel is an important tool in the functional medicine evaluation. Ask my office for more information about identifying and addressing Hashimoto’s hypothyroidism.