When managing Hashimoto’s hypothyroidism, you should not overlook the importance of addressing your brain health and function. 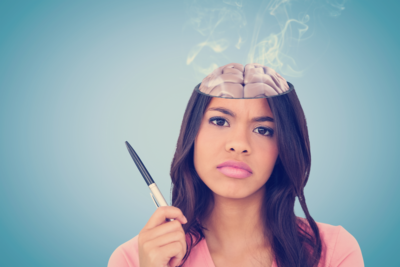 Hashimoto’s hypothyroidism can have profound effects on the brain and you may need to support your brain in addition to managing your Hashimoto’s thyroid condition.

Because every cell in the body needs thyroid hormone for proper function, a thyroid hormone deficiency can significantly impact brain health and function. Likewise, the inflammation that accompanies unmanaged Hashimoto’s can inflame and degenerate the brain.

It is these reasons why many people with unmanaged Hashimoto’s hypothyroidism experience depression, fatigue, brain fog, memory loss, worsened cognition, and other brain-based symptoms.

One of their most important roles is to dampen brain inflammation through their effect on the brain’s immune cells, called microglia cells. Unlike the body, the brain does not have an off switch for inflammation and it depends in part on sufficient hormone function to keep inflammation in check.

Unchecked inflammation can degenerate, or age, the brain too quickly.

While taking thyroid hormone medication may be necessary, it’s also important to address your autoimmune Hashimoto’s by removing inflammatory triggers, dampening inflammation, and restoring balance to the immune system.

Hashimoto’s is an autoimmune condition that causes 90 percent of hypothyroid cases in the United States; the immune system must be included in care.

In fact, it’s not uncommon for people with Hashimoto’s hypothyroidism to also have autoimmune attacks against their cerebellum, an area of the brain that plays a role in movement and coordination.

If you have Hashimoto’s and also have symptoms pertaining to balance, dizziness, or nausea, you may want to be screened for brain autoimmunity.

A worst-case scenario when it comes to Hashimoto’s and brain autoimmunity is Hashimoto’s encephalopathy (HE), also known as autoimmune dementia, HE is caused by the same immune antibodies that destroy thyroid tissue — thyroid peroxidase (TPO) antibodies. In addition to memory loss, symptoms can include tremors, seizures, impaired speech, confusion, partial paralysis, fine motor problems, and poor coordination. However, HE is not common and you should not assume you have it.

This information is important because many doctors tell their patients to wait until their thyroid “burns out” and then remove it surgically. This does nothing to treat an overzealous immune system that is at the root of thyroid dysfunction and poor brain health.

If you have been diagnosed with Hashimoto’s hypothyroidism, ask my office about how functional neurology can help you recover and optimize your brain health.