A Hidden Trigger of Hypothyroidism: Too Much Salt

Those with high blood pressure and heart disease know to avoid salt, but researchers have learned salt comes with another risk — too much alters immune cells in a way that promotes autoimmune diseases such as Hashimoto’s hypothyroidism. 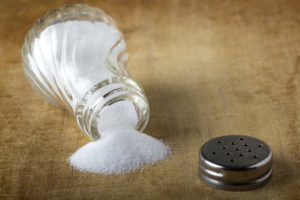 Although salt is not in itself harmful, Americans are guilty of eating way too much salt, more than the human body was ever designed to process. Fast foods, junk foods, and snack foods are all heavily salted to increase palatability and mask their inherent poor quality.

Sadly, our extreme consumption of salt raises the risk of the body’s immune system attacking itself and destroying viable tissue; this is what autoimmune disease is. For instance, in Hashimoto’s hypothyroidism, the immune system attacks and destroys the thyroid gland. In type 1 diabetes, it is the pancreas that falls under attack. This gradual tissue destruction, along with the inflammation generated from the autoimmune attacks, causes a wide array of chronic and seemingly irresolvable symptoms.

The cells in the immune system responsible for this auto-destruction are called TH-17 cells. Researchers discovered that immune cells exposed to salt turned into TH-17 cells. Further experimentation showed mice fed a high-salt diet were more likely to develop a disease similar to multiple sclerosis.

A later study on human subjects showed just seven days on a high-salt diet put the immune system into inflammation overdrive, just as if it were encountering an infection or in the throes of an autoimmune attack on the thyroid in Hashimoto’s hypothyroidism. An interesting side note: The high-salt diet used in the study represented salt intake for the average American.

Increased TH-17 means increased inflammation in general. This not only raises the risk of autoimmune diseases such as Hashimoto’s hypothyroidism, but other inflammation-based diseases all too common today: heart disease, cancer, stroke, and disorders of the gut, skin, and respiratory system.

Should you stop eating salt if you have Hashimoto’s hypothyroidism?

Although researchers are quick to say removing salt is not going to cure an autoimmune disease, it’s important to pay attention to your salt intake if you are working to manage such as Hashimoto’s hypothyroidism or other chronic inflammatory condition.

The USDA daily recommended intake of sodium is 2300 mg, which is the equivalent of only one teaspoon of salt. Some argue we need even less than that and get plenty from produce and meats. Either way, the average American consumes twice the recommended amount, which research has shown causes inflammatory changes in the immune system.

Those who have low blood pressure may have been told to consume extra salt in order to raise blood pressure. Low blood pressure means tissues in the body, including the brain, are not getting sufficient oxygen, nutrients, and other compounds. In this case, trial and error may be necessary to see what works. Glycyrrhiza, a compound in licorice root, may also be effective in raising blood pressure.

Contact our team to learn how simple testing can check your levels and identify autoimmune conditions! Or click here to schedule a free clarity call with Dr. Labbe!