How I Convince My Pasta-Loving Clients to Go Gluten-Free

Amanda was like so many of my clients when she scheduled a consultation with me. “I’m tired, fat, losing my hair, tired, and I’ve got zero sex drive,” she told me. “And did I mention tired?”

I already suspected that Amanda, like an estimated 20 million other Americans (according to the American Thyroid Association), had a thyroid condition. When I got her blood tests back, I found that my hunch was right. Her blood was filled with antibodies – the calling card of Hashimoto’s Disease, the most common form of hypothyroidism. 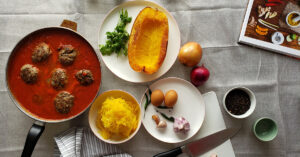 When I sat Amanda down, I explained the situation. “Your immune system is attacking and destroying your thyroid.” I braced myself and let the other shoe drop. “You can’t cure an autoimmune condition. All you can do is manage it. That means no gluten – no wheat, barley, or rye.”

I could almost see all the future pasta, brownies, and cookies she would never get to eat again flashing before Amanda’s eyes. Over the last 20 years I’d had to deliver the same news to hundreds of women with Hashimoto’s at my clinic. In 2007 it was my face with the look of horror on it as I read my own yearly blood panel and found out that I – a thyroid disorder expert – had Hashimoto’s. Oh, the irony!

“What will I eat?” Amanda finally asked.

The Connection Between Gluten and Autoimmunity

Gluten, a protein found in wheat, barley, rye and other grains, is everywhere in the American diet, from the sesame seed buns on our hamburgers to surprising places like soup and commercial salad dressings! How can something as innocent and delicious as a glazed doughnut cause a person’s body to go haywire?

The answer lies in a protein within gluten called gliadin. (Yes, a protein within a protein.) Gliadin just happens to look just like a special enzyme called transglutaminase found in the thyroid. Think of gliadin as transglutaminase’s evil twin. When someone with Hashimoto’s, like Amanda, eagerly digs into a pasta dinner, all that gliadin eventually makes it through her gut into her bloodstream. Her immune system, always on alert for intruders, tags the gliadin as Public Enemy Number One and goes after it. Unfortunately, transglutaminase gets caught in the crossfire.

In other words, the immune system mistakes the thyroid – with all its transglutaminase – as an enemy and goes on the attack. After waves and waves of these attacks, the poor thyroid can’t release as much of its critical hormones (T3 and T4). That’s why Amanda felt tired, tired, and more tired. Her thyroid wasn’t working.

A Gluten-Free Life Can Be a Life of Abundance

I’ll be the first to admit that gluten-filled dishes may eliminate some of your favorite ingredients, but you know what also feels good? Not waking up exhausted. Not wondering if your libido went into permanent retirement.

I work closely with patients like Amanda to help them understand that health is worth giving up the linguini. There are still a plethora of delicious and nutritious food that gluten-free individuals can eat with joy, like tasty beef, poultry, fish, fresh fruits and vegetables, as well as nuts, seeds, beans, and legumes.

All of us have gluten cravings in the beginning, but time heals all cookie dough cravings. I remind my clients that the internet is filled with many gluten-free cookbooks and recipes.

Within just a few weeks of going gluten-free, Amanda was a champion of stir fry, and her spark was coming back. The weight finally came off, and as far as libido went, let’s just say her husband wasn’t complaining.

Hashimoto’s is extremely common and highly underdiagnosed. It tends to strike women reaching middle-age. If you suspect that your fatigue and other symptoms are more than ordinary aging, it’s time to dig deeper. Ask for a blood panel that looks for Hashimoto’s (many doctors will only look for hypothyroidism, not specifically Hashimoto’s). If you have Hashimoto’s, the best way to start managing the condition is to cut the gluten. It may seem like you’re giving up a lot, but what you’ll get back in return will be your health. That’s a pretty smart trade in my book!

I would love to help you get started on your journey, and share some of the tricks I’ve learned to curb carb cravings. I don’t just talk the talk, I’ve walked the walk! Get started by scheduling a free phone consultation: thyrosisters.com/clarity-call.