Want to improve your mood, health, brain function? An ample and diverse supply of healthy gut bacteria has been shown to be essential, and that is best obtained through eating lots of different kinds of produce. 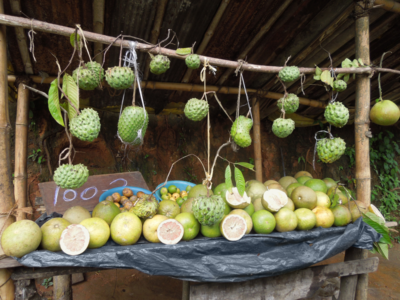 Try going out of your comfort zone in the produce aisle and incorporating some new varieties of vegetables and fruits.

The digestive system is host to nearly four pounds of bacteria — some considered “good,” some considered “bad” — and while both have roles to play, it’s critical to actively support the good bacteria to avoid leaky gut, SIBO (small intestine bacterial overgrowth), and systemic inflammation, all of which contribute to Hashimoto’s hypothyroidism and other chronic illnesses.

The recommended produce consumption is seven to 10 servings a day. That may sound like a lot, but one serving is only a half cup of chopped produce, or a cup of leafy greens. Aim for produce low on the glycemic scale — sugary fruits may create problems for those with unstable blood sugar who are managing Hashimoto’s hypothyroidism.

Expand your options with new and unusual produce

If you are looking to expand your consumption of produce and need some inspiration, seek out some of these fresh fruits and vegetables at international or health food stores that bring in varieties of produce lesser known in the west: