Hangover facts when you have Hashimoto’s hypothyroidism 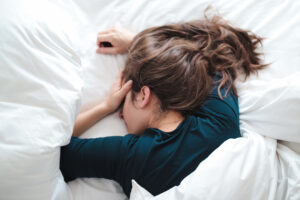 It’s no secret that drinking too much alcohol can cause a hangover.

Have you ever wondered what goes on inside your body that could cause so much suffering? The facts are intriguing, and may even change how much you drink, especially if you are working to manage your Hashimoto’s hypothyroidism.

The formal term for hangover is veisalgia, from kveis, the Norwegian word for “uneasiness following debauchery,” and algia, the Greek word for pain. Generally, the more drinks consumed, the worse the hangover. Some common symptoms of hangover include:

While we don’t know why all the symptoms of hangover occur, scientists have uncovered some unique facts behind the physiology of the common symptoms. Knowing them can help you be more aware of how alcohol affects your body when you’re working to manage an autoimmune condition such as Hashimoto’s hypothyroidism.

Alcohol consumption blocks the production of vasopressin, a hormone that promotes water absorption in the body. Without enough vasopressin, the body sends water directly to the kidneys for elimination. Ever notice how much you run to the restroom when you’re out for drinks? Studies have shown that drinking about 250ml of an alcoholic beverage causes the body to expel 800 to 1000ml of water; a four-to-one loss!

This diuretic effect helps create the fatigue and dry mouth. And that headache? During dehydration, the body’s organs compensate by stealing water from the brain, causing it to reduce in size and pull on the membranes connecting it to the skull. Ouch!

Frequent urination also depletes the body of magnesium and potassium, critical for proper muscle and nerve function, a lack of which can lead to headaches, fatigue and nausea. Although drinking isn’t helpful when you’re managing Hashimoto’s hypothyroidism, be sure to load up on electrolyte enhanced water if you do drink to help mitigate the effects of dehydration.

Alcohol breaks down the body’s store of glycogen, a key energy source, turning it into glucose that gets expelled in the urine. The resulting lack of glycogen is partly responsible for the weakness, fatigue, and lack of coordination you feel the next day. When you’re managing Hashimoto’s hypothyroidism, blood sugar stability is vital to modulating the immune system. This is something to keep in mind when you consider drinking alcohol.

The amount of alcohol consumed isn’t the only factor; what kind of alcohol you drink affects you, too. Alcohol contains congeners, toxic byproducts of fermentation. The greatest amounts are found in red wine and dark liquors such as bourbon, brandy, and whiskey, while less is found in clear liquors such as vodka and gin. White wine has the least. Combining different kinds of alcohol compounds the toxic effect. Finally, the carbonation in beer speeds up alcohol absorption; following beer with liquor puts extra strain on the liver to deal with the added toxins, hence the phrase, “Beer before liquor; never sicker.”

A product of alcohol that is more toxic than alcohol itself, acetaldehyde, is created when liver breaks down alcohol. The body attacks it with a powerful antioxidant called glutathione. When we drink in moderation, the levels of glutathione in the liver can keep up with the need for detoxification; we feel fine the next day. When we drink too much, the liver’s store of glutathione depletes quickly, allowing toxic acetaldehyde to build.

Glutathione is our body’s most powerful antioxidant; this enzyme is integral for regulating the immune system, and is on the front line of fighting destruction from oxidative stress in the body. You need it to function well. When glutathione is depleted, it sets the stage for destructive inflammatory processes; in fact, studies show a direct correlation between a breakdown in the glutathione system and autoimmune disease.

Ample glutathione is vital to managing Hashimoto’s hypothyroidism and you don’t want to risk depleting your stores with alcohol. Ask my office how we can help you boost your body’s glutathione levels.

The fatigue, stomach irritation, and general malaise that hangovers deliver have been tracked to glutamine rebound. While you drink, alcohol inhibits glutamine, one of the body’s natural stimulants. When you stop drinking, the body responds by producing more than it needs. The increased glutamine stimulates the brain, preventing deep, refreshing levels of sleep, which results in fatigue the next day. Severe glutamine rebound may also be responsible for hangover tremors, anxiety, restlessness, and increased blood pressure.

Alcohol can contribute in a variety ways to leaky gut, a condition where the lining of the intestinal tract becomes over-permeable, allowing foreign particles into the bloodstream and promoting inflammation throughout the body.

Heavy alcohol consumption also damages the lining of the gastrointestinal tract, reducing the body’s ability to extract nutrients from food. This can lead to micronutrient deficiencies that help drive various chronic disease states.

As you can see, excessive alcohol consumption has some pretty serious effects on the body; our casual cultural mindset about the consequences –- a hangover –- gloss over the ugly truth of what happens inside the body when we over-consume alcohol.

Contact our team  for tips on dealing with a hangover and how to manage Hashimoto’s hypothyroidism.