How I Test for Gluten Intolerance 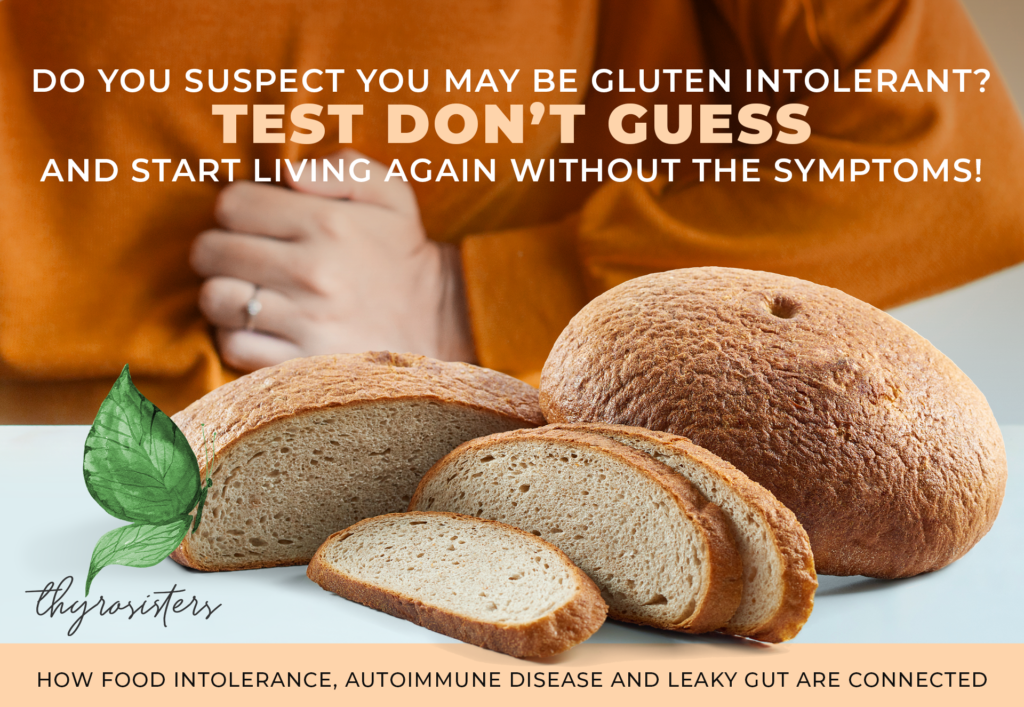 Suffering from bloating, diarrhea, fatigue, and skin drier than Death Valley is no fun at all, but are your symptoms caused by gluten intolerance or by something else? In my practice, I have seen hundreds of women suffering from gluten intolerance. In many cases, this intolerance is directly related to an autoimmune disease like hypothyroid Hashimoto’s (i.e. an underactive thyroid).

Understanding the Connection Between Gluten Intolerance and Autoimmune Disease

The hallmark of an autoimmune condition is that your immune system gets confused and attacks your body causing a long list of unpleasant symptoms. Some of the most popular forms of autoimmune disease are hyperthyroidism and hypothyroidism. In fact, roughly 20 million Americans suffer from thyroid disease, but since the symptoms are so variable (from fatigue to a pounding heart, hair loss, and brain fog) over half of people with thyroid diseases don’t even know they have it. In particular, women are five to eight times more likely to suffer from a thyroid condition than men. 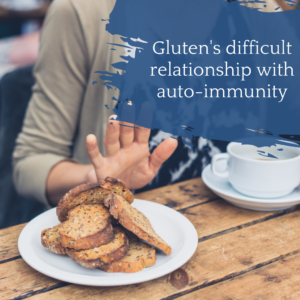 Gluten is one of the most common exacerbating factors of a thyroid condition. Gluten is a mixture of two proteins found in wheat and other cereal grains. One of those proteins is called gliadin. The problem starts in your gut. If you have gluten sensitivity, gluten can begin to inflame your gut and degrade the lining of your small intestine. This next part is a little shocking, but it’s true. Over time, your inflamed small intestine can become permeable, allowing food particles to slip through, right into your bloodstream. This is what we in functional health circles call a leaky gut.

Well, free-floating food particles will raise the alarm of your immune system, which will rush in to destroy the invaders. Here’s the rub. The protein gliadin looks a lot like the tissue of your thyroid. When your immune system identifies gliadin as an enemy that needs to be destroyed, it can also end up attacking your thyroid. Friendly fire!

The antibodies triggered by these episodes can travel throughout your body, which is why the symptoms of gluten intolerance and hypothyroidism affect so many different areas of your body.

This is why one of the cornerstones to treating hypothyroidism in a holistic and functional way starts with testing for gluten and other food intolerances.

My ThyroSisters know that one of my favorite catchphrases is, “Testing, Not Guessing!” When a new client comes to me with complaints that sound like food sensitivities, I typically recommend performing a food sensitivity panel. The panels can be pricey, but for many of my clients, the cost is worth the information these tests provide.

The downside of performing a blood panel is that milder cases of gluten intolerance can be missed, giving individuals a false negative. That’s why I often like to suggest a second type of test that I call “The Gluten Challenge.”

Using the Gluten Challenge to Test for Gluten Intolerance

The gluten challenge takes some patience and dedication, but it is a low-cost and low-tech way for you to test yourself for gluten intolerance with the help of your functional health practitioner. The first phase of the test is The Elimination Phase.

As the name suggests, during the elimination phase, you’ll cut out all gluten from your diet. This is where the dedication comes in. You’ll need to get rid of all the wheat and bread-based items in your kitchen as well as the many other items around your home that may contain gluten. (You’ll probably be shocked at how much gluten has snuck into your life!) Avoiding gluten can be a little challenging, but when your health is on the line, I know you’ll be able to do it.

The gluten elimination phase usually lasts two to six weeks. During this time, you’ll work with your functional health practitioner to document your symptoms. If you are sensitive to gluten, your symptoms should lessen or even disappear.

After the elimination phase is complete, you will enter The Challenge Phase. During this phase, you’ll introduce gluten back into your diet for several days. Again, you’ll need to keep a close eye on your symptoms. If they return, that gives us pretty strong proof that you are gluten intolerant.

Expanding on the Gluten Challenge 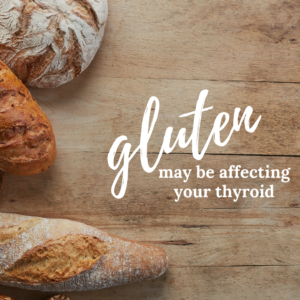 If you have multiple food intolerances, then taking the Gluten Challenge may not yield strong results. You may notice a slight improvement in symptoms due to the elimination of gluten, but if your immune system is still reacting to dairy and other grains, you may conclude that gluten isn’t your problem.

When I suspect food sensitivities in a client, I like to put them on what is often known as an Elimination Diet. To be honest, I don’t really like this name, because it implies deprivation instead of a diet designed to help you bring wellness back into your life. (That’s why I like to call it the No-More-Leaky-Gut Diet.)

The Elimination Diet works very much like the Gluten Challenge, but instead of just cutting gluten out of your diet, you’ll be cutting anything that could possibly cause an immune reaction. The diet is strict, but it still leaves room for healthy, nourishing, delicious meals. Trust me! I’ve gone through it myself. It does help to work with a functional practitioner to guide you on what you can eat and what types of food you should avoid.

After a few weeks, your functional health practitioner will gradually begin adding items back into your diet, such as eggs or nightshades (foods like tomatoes, potatoes, and red peppers). You’ll wait a few days to see if you experience any symptoms. If not, then little by little, you’ll add more items back into your diet until or if you begin to feel symptoms again.

Trust me, all the effort is worth it. Many of my clients don’t even realize how much their food intolerances are dragging them down. They’ve gotten used to the fatigue, brain fog, and upset stomach. Getting rid of these symptoms often gives them a new lease on life.

Of course, working through food insensitivities is only one part of treating and managing an autoimmune disease. If you think you might have Hashimoto’s or gluten intolerance, schedule a Clarity Call with me today. I can’t wait to meet you.